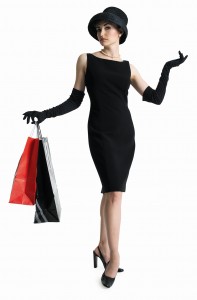 With “Black Friday” around the corner kicking off the biggest shopping season of the year (retailers and economists hope) here is one for the “born to shop” in all of us!

EXPERTS PROVE SHOPPING REALLY IS GOOD FOR YOU!

Years ago when I was maybe 10, 12 tops, my mother told me a supposedly true tale about her artist friend Isabel. Now, Isabel was famous among my parent’s cadre of old chums from the Brooklyn days for being the most neurotic of them all. Ethnic food, dirty people, dirty ethnic people and actual dirt were verboten to Isabel. Being the neurotic-est was no small achievement considering the company she was judged within – after all it included my mother, she of the nervous breakdowns of which we did not discuss.

Anyway, here is the story: Isabel was an early adopter of psychiatry as well as psychotropic medication, but one weekend none of it was working and she was going off her skull. She called her psychiatrist at home (who she was very likely having an affair with and maybe was just trying to create some drama) and he told her ‘Get into the stores and buy something!’ And my mother’s follow up commentary would be how buying something helps us cope and empowers us as women.

Now I have always thought this story was a parable designed to alleviate any guilt about the crazed power-shopping my mother would binge on – coming home with those bargains too good to pass up as the clothes from the last episode still hung with tags on.

But, noooooooooo! Last week’s New York Times Magazine says it is all true. In a short piece called Shopper’s High we find the Emilyland quote of the century so far:

“Any time you can buy something beautiful that you really love and fully enjoy it without the guilt you are improving your mental health,” – says Kit Yarrow, a consumer psychologist at Golden Gate University.

Now I could go ahead and let my inner cynic research whether Golden Gate University is, like, you know, a mail-order degree factory or if Ms. Yarrow is on the payroll of Federated Department Stores (owners of Macy’s, Bloomingdales and g-d knows what else) but why? I’m gonna take it as truth and cut and run right there ….down to the mall that is.